USCCA vs NRA Carry Guard
USCCA Review [2017]: Why I Chose Them
July 22, 2017
What Exactly is Concealed Carry & Self Defense InsuranceI only became aware of the entire concept of concealed carry insurance earlier this year after USCCA gave out free t-shirts at SHOT show.  I would have forgotten…but their emails do not let you forget.

So Many EmailsBut hey…super effective since I ended up buying the insurance and writing this article!
So what exactly is this kind of insurance?
Basically…if you defend yourself with a gun (or other weapon), you’re going to be in a big mess…even if it was justified.
Insurance comes in to help with bail, civil/criminal defense, lost wages, etc.
Chances are you’ll never have to use it.
But if you’re carrying…there’s that slight possibility.  And we’ve all seen what happens to people who go on trial for self-defense (It’s Not the Odds, It’s the Cost).
And it’s not a pretty sight.
At least now you might not have to go into bankruptcy and wreck your family.

Pricing
Next thought I had was…ok, so there’s that slight possibility of a world of hurt…how much does it cost to alleviate it and protect my loved ones?

USCCA has 3 tiers of protection:
Not bad…at least at the lowest tier.  That’s like one box of .45 ACP a month.

Next up, let’s see what you really get.

What You Get in USCCA’s Self Defense Shield So I’m not some insurance pro, and if you’re in the market for this stuff always do your own research and read the actual fine print for whatever insurance product you end up getting. 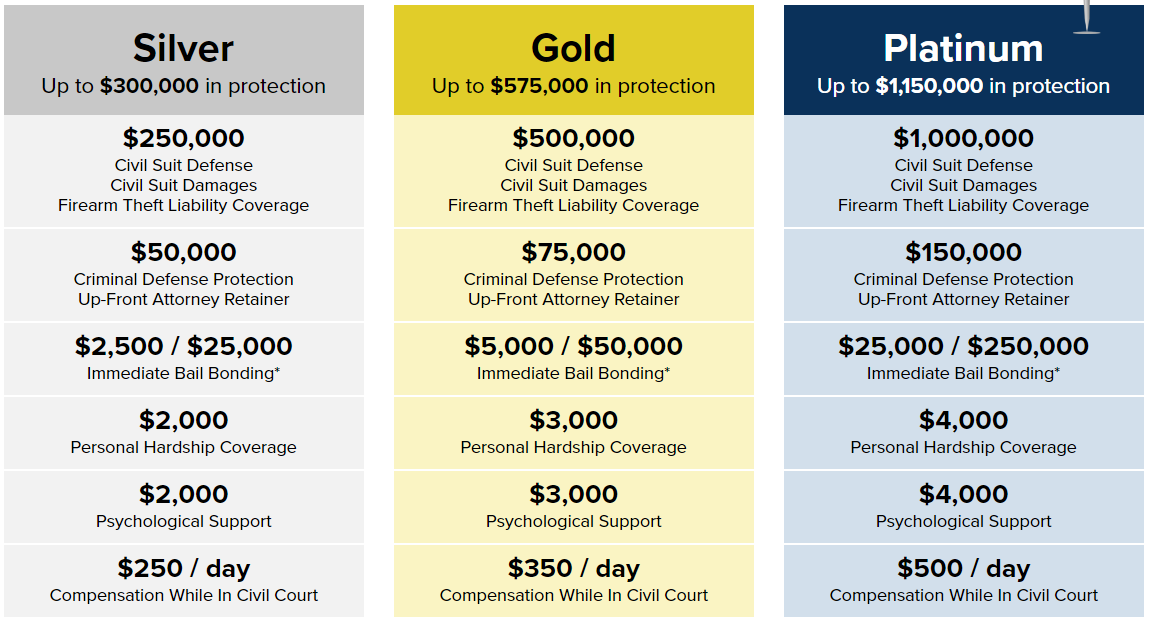 Let’s walk through each of these using the Platinum plan: Let me know if I goofed anywhere too!

So I definitely compared the rates and coverage vs some other guys.  In this case I went with the 2nd biggest (or at least 2nd best marketed) player…the NRA’s Carry Guard.

I always knew NRA had some insurance program…that wasn’t the greatest according to almost everyone.
But its new Carry Guard made a big splash…but not for being revolutionary.  But for how NRA dis-invited USCCA from its 2017 Annual Meeting where they announced their new insurance.

So how do the two compare (USCCA Platinum vs NRA Gold)? 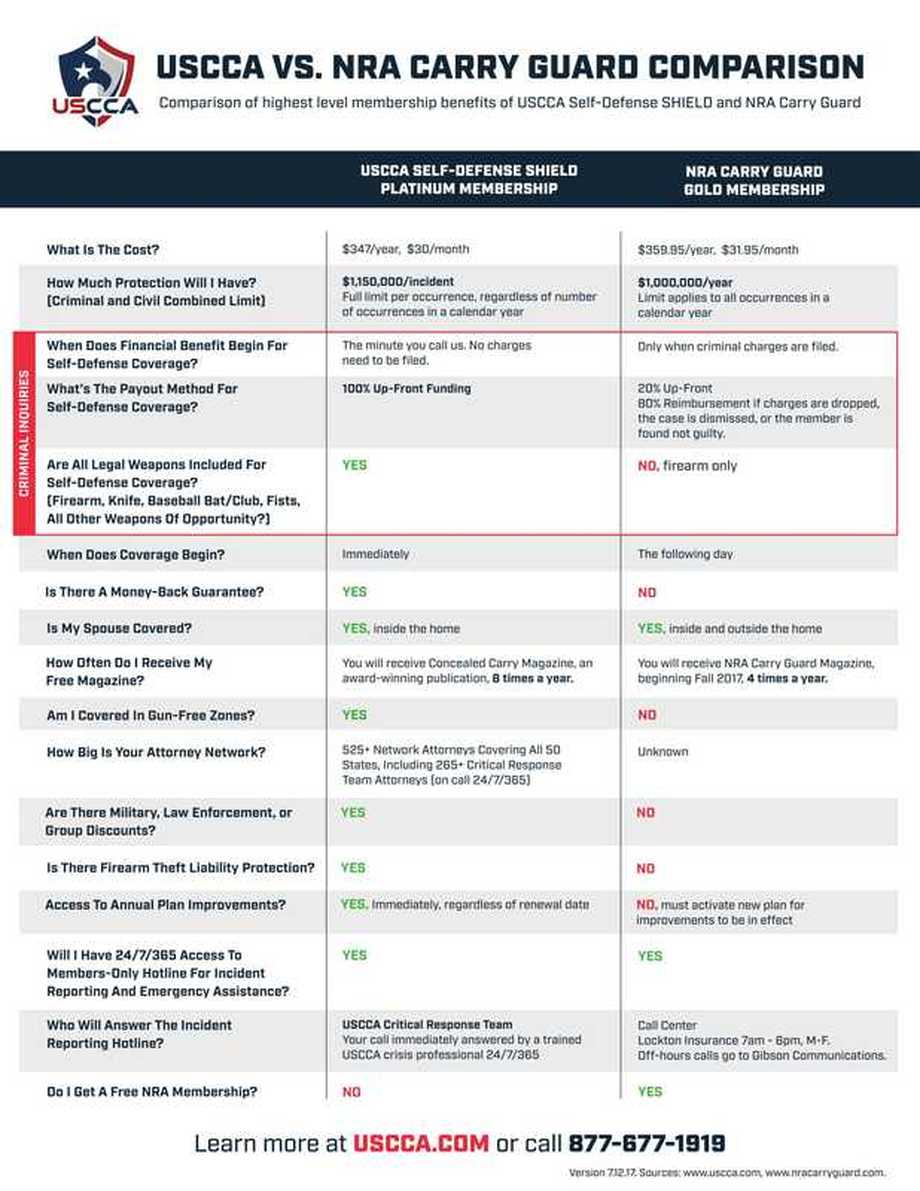 Let’s break down the big points in my opinion:

Again, let me know if things have changed…yet again.

USCCA vs Others
I know a bunch of you are thinking right now…but I’ve got [other kind of CCW protection], how does it compare?!?

I tried going down the rabbit hole but got really lost.  I’ll leave it to you to research more.

Here’s some of the ones I’ve found.
So do your homework!

But here’s my thoughts on why I chose USCCA.

Why I Eventually Chose USCCA
Some NegativesSo I’m very glad to not have actually used the insurance.  But off the bat there’s a flurry of emails.  So be ready for that…but it’s something that’s easily remedied with an unsubscribe.

Also, the tone of the videos and ads that now I’m bombarded on other sites (thanks retargeting) is always a scare tactic.
I get it!

I ended up with the cheapest Silver monthly plan from USCCA.  Check out all of them here.

And that’s because I know there’s the very small chance of me needing it, and I don’t carry most of the time anyways.  But I do like how it covers both my wife and me in the house.

What’s your take on CCW insurance…do you have USCCA or another one?

Written By Eric Hung
Hi, I'm Eric Hung and I got into guns when I was around 25 and started with YouTube videos, scouring forums, and eventually taking a bunch of classes.  I soaked up as much information as I could online, at competitions, and from tinkering in my workshop.  I became my group's "gun guy" and everyone who had questions came to me.  And now I hope to answer some of yours! Learn more at About Us.